The Macedonian Antoni Maznevski belongs to a revolutionary
generation of the art scene in the Balkans. The spectrum of his
sculptural work is shown from several aspects as self-conscious:
the formal and thematic roots in local conditions, the analysis of
the strategies of western Avant-garde, and ambition, grounded
in the joy in innovation to be globally perceived outside alleged
European outskirts…
Since the 90-ties, Maznevski’s wealth of variations has been surprising
again and again. Thus, there are two perfectly welded
rear parts of a black VW Beetle in a versatile metaphor: the vehicle
for the masses of the former western European economic
miracle has been sentenced to a halt. As a symmetrically harmonized
construction, the famous industrial product, the symbol of
the mobility of society, is neutralized.
Perfectly shaped in another manner, but in its basic idea akin
to the alienation of the cultural pattern, a group of Maznevski’s
sculptures, which he realized in an exhibition at the Museum of
the City of Skopje in 2002, stands out. Sculptural abstractions in
the style of 50’s are associated in a poetic way with the traditional
wood sculpturing of Macedonia.
In terms of the Maznevski’s debate with the technology of the
medium – especially in his television objects – there is an analogy
with the momentum of the Fluxus-movement. Nam Jum Paik’s
TV Buddha parodied the passive attitude of the audience by
means of antagonism between the meditative sinking of a Buddha
statue and a procedure for live coverage. Maznevski used
several TV-devices as in the work shown in Vizbaden Surface of
the TV landscape. A TV test picture, the simple absence of The
End on the screen or of the horizontal lines which appear again
when the old TV devices are disconnected. This highlights the
minimalist contrasting signs of the infinitely rapid time of the TV
expansion. Our horizon, channelled through the television, also
reflects the Surface of the TV Landscape: 8×3 one over another
piled up black and white TV boxes build a human size in the form
of a spectrum of colours. The technical medium of transmission
through the painting is brought to blinding. 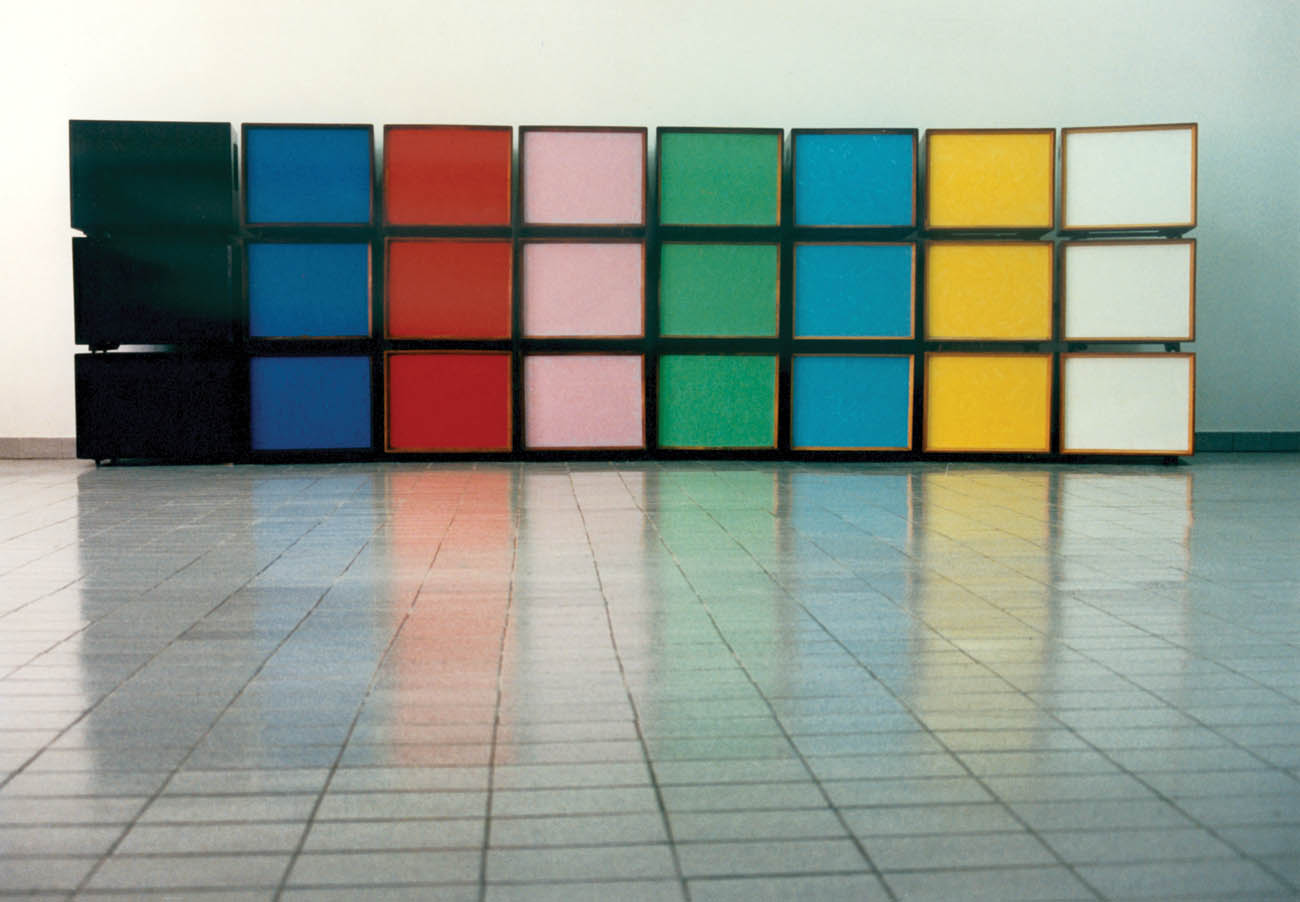